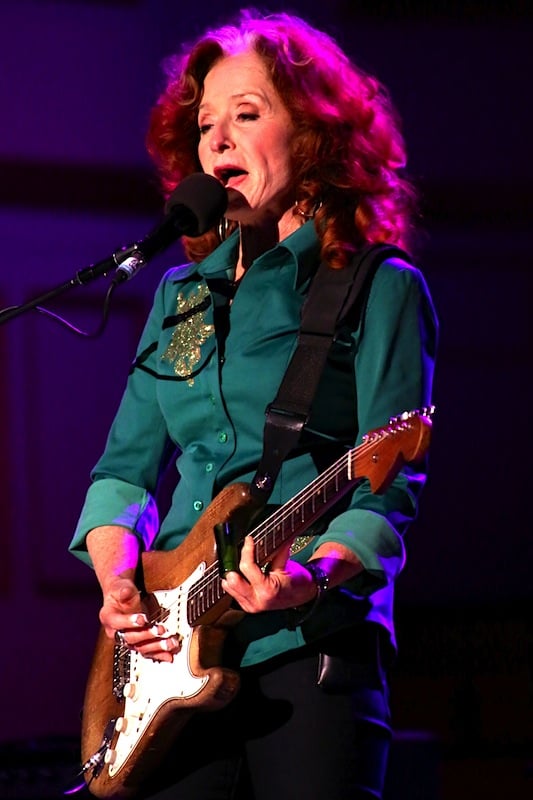 Bonnie Raitt returned finally after 7 years in 2013 to Germany for a 3 date mini tour. Her tour start was in Hamburg in the luxurious Laeiszhalle in Hamburg. The shows were still on promotion for her record “Slipstream” from 2012 for which she had gathered her 10th Grammy award. Normally such a highlight-event should be sold-out, but unfortunately not.
At the Stadtpark were playing the Woodstock veterans of Crosby, Stills & Nash at nearly the same time. But anyhow all attending fans were in high hopes for the upcoming.

Foy Vance from Dublin, Northern Ideal was the opener. Rarely there was to witness a singer-songwriter and even as one man show to inspire a crowd to sing along in such a brilliant, loud and strong way as background-choir. The charismatic Foy managed it by bravery. In August his new album “Joy Of Fortune” will be released, definitely a cd worth to listen to.

Bonnie Raitt kicked-off with ‘Used to Rule The World‘. Ideally from her actual masterwork. The fire by ardor was burning immediately in the auditorium. George Marinelli was ever so brilliant as lead guitarist by his solos. He is the congenial partner for Miss Raitt since years. And Bonnie as female slide guitar Queen let her green bottleneck slide wildly along her fingerboard of her Fender Stratocaster.

Ricky Fataar was ending the song by heavy drum beats. The fans were immediately hot. Bonnie loved to talk and joke to them intensively. She was expressing her adoration to Gerry Rafferty, who died in 2011 by his song ‘Right Down The Line’. First top-song was ‘Something To Talk About“ to create a wonderful Gospel atmosphere by the harmony vocals of her musicians and in contrary her stunning rough voice.

By “Million Miles“ as Bob Dylan Cover she was playing the first time an acoustic guitar. What an amazing blues arrangement, intensified by keyboarder Mike Finnigan and George at a glance by their jazzy solos. The bourbon trenched vocals by Bonnie were so spunky. Normally it should be really summertime by end of June, but it was very chilly in Hamburg. At least there was to rise this special feeling by ‘Come To Me’ by these wonderful calypso rhythms.

The redheaded Bonnie was dancing in very sexy style over the stage conducted by the bass tunes of Hutch Huthinson. ‘Nick Of The Time“ would have been ideal to dance intensively, but the fine seatings somehow prevented to do so by her admirers. She was switching to the keyboards by this hit, showing what a multi-instrumentalist she is. Lady Raitt is famous for her country ballads and by ‘Angel From Montgomery’ and ‘Not Cause I Wanted To’ she was presenting two miraculous and spiritual ones. These were definitely the highlights of the show, giving religious strength to the listeners for eventual problems.

Jon Cleary, who was for ten years her very virtuous keyboarder and on top songwriter for her got his tribute by ‘Feels So Damn Good’. There was still somehow the musical passion for him by her introduction. The funky second-line parade-rhythms turned the Laeiszhalle into a wild saloon. Standing ovations for this set-end which made her and her wonderful band to enter the stage again for the encores. As stomping final she presented the country-rocker ‘Real Man’. Very hot and steamy, yee-haw! By the fantastic, rousing Hamburg audience Bonnie Raitt could have been playing all night long. But there had to be an end once and she was terminating at the best spirit by it.