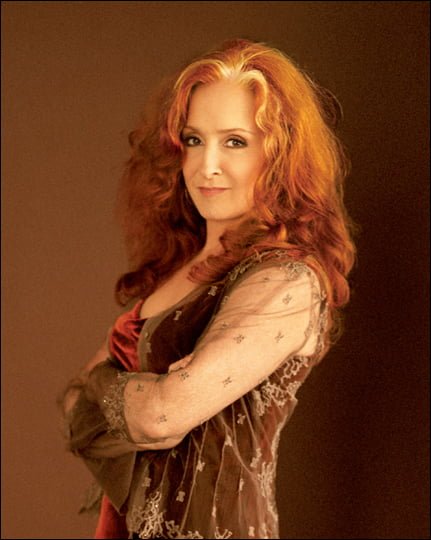 ARE THERE ANY active old-school divas that we can still look up to? Cher? Retired. Tina Turner? Retired. Barbara Streisand? Her too. Joni Mitchell? Yep. Linda Ronstadt? Almost M.I.A. Diana Ross? A sad joke by now. Carly Simon or Carole King? Debatable.

Well, there is one big exception. Other than mid-’80s and mid-’90s lulls, Bonnie Raitt has been proudly engaged in her craft since her 1971 debut. Rather than letting age slow her down, her last two decades have proved her to be a provocative late bloomer, racking up Grammys, best-selling albums and hit singles. Not too shabby for a woman pushing 60.

So what’s Bonnie Raitt’s secret to staying in the music game so long? Call it spunk, chutzpah, guts… But it’s more than sheer determination. Raitt’s managed to carve herself out a singular niche as a performer.

It helped that Raitt had a strong background in music. Not only was her father a Broadway showman, but she also spent part of the ’60s playing alongside blues legends like Muddy Waters and John Lee Hooker. All of which doubtless rubbed off on her, something especially apparent on her first album. Tellingly, she took up a languid, relaxed approach to the blues that recalled Jimmy Reed rather than gruff Chicago shouters like Howlin’ Wolf. That same style would carry over to her next album, 1972’s Give It Up, where she would apply that same ease and laidback style to create quintessential California rock. Unlike peers such as James Taylor or Jackson Browne, though, Raitt knew the difference between easy-rolling fun and catatonic depression. As such, she also created a template for adult contemporary rock a few decades before it was ready to be fully exploited as a market. And mind you, Raitt was accomplishing this when she herself was still in her early 20s.

For the rest of the ’70s, she shored up her critical, if not commercial, support by maintaining a run of quality albums and creating a distinct persona for herself. Records like 1973’s Takin’ My Time, 1975’s Home Plate and 1977’s Sweet Forgiveness weren’t exactly out-on-a-limb risk-taking exercises but solidified her reputation as a prime song interpreter. While Ronstadt was tearing up the charts, Raitt was her rootsy counterpart, also plucking quality material from lesser known singer-songwriters, including Eric Kaz, Chris Smithers – not to mention Browne and Taylor, whose songs improved with her care. Though Ronstadt had a better voice (despite overusing her range sometimes), Raitt was a good singer in her own right (a touch of gospel inflection here and there) and played a mean slide guitar to boot.

And like Ronstadt, Raitt herself was not a bad looking woman, with her long red locks and sweet smile. Legendary songwriter John Hiatt knew this for sure, commenting on Raitt’s hit version of his tune ‘Thing Called Love’ (from ’89): “I still fantasize that it’s me she’s singing to in her video and not Dennis Quaid.” But while Raitt never thought to hide her “sultry” side, as Hiatt called it, she also hasn’t felt the need to turn her romantic side into sleaze – although she tested the limits with songs like ‘Mighty Tight Woman’. At the same time, she never made herself out to be a cream-puff, even when she did a gorgeous ballad (i.e., ‘Nothing Seems to Matter’, ‘Run Like A Thief’). She’s maintained this admirable balancing act throughout her career and, by virtue of persevering, you might even call her something of a women’s icon.

It wasn’t always easy for Raitt, though, as she limped into the ’80s. She started off strong with one of her most rockin’ sets of material, 1982’s Green Light. But a few years later, she fell out with her record company and for the first time in her career, let her artistic instincts fail her. After having it canned by her label three years earlier, 1986’s Nine Lives was her last record of her 15-year run at Warner Brothers. And the fatigue was definitely showing – the record was full of over-produced 80s bluster (with a song from Bryan Adams no less). Around the same time, Raitt was battling with substance abuse. After years of going strong, she was hitting rock bottom.

And then a wonderful thing happened. She not only bounced back but she finally broke through commercially in a big way. With 1989’s Nick of Time and 1991’s Luck of the Draw, Raitt finally became a star, racking up hit singles, multi-platinum albums and a total of five Grammys between those two records. Raitt herself credited her new found success to her sobering up process and producer Don Was. While these certainly helped, having undeniable, sure-fire material like ‘Something To Talk About’, ‘I Can’t Make You Love Me’ and ‘Thing Called Love’ was also key.

This amazing success finally allowed Raitt to work at her own pace. After another hit (‘Love Sneakin’ Up on You’) and a Grammy (Best Pop Album) for 1994’s Longing In Their Hearts, she was able to take time off to concentrate on humanitarian causes (especially environmental issues) where her interests stretched back to ’60s. She returned in 98 with Fundamental and with 02’s Silver Lining, stretching back to her roots for her most bluesy work since her debut. In between these, Raitt capped off the new millennium with her induction into the Rock and Roll Hall of Fame. Last year marked her 18th record (as well as her first self-produced album), the excellent, downtown soulful Souls Alike, which led off with a Grammy-nominated top 20 hit, the defiant ‘I Will Not Be Broken’.

At the moment, Raitt is in the middle of an extensive tour and it’s hard to imagine what would make her throw in the towel. Though Sir Paul and the Stones flaunt the same career ethic, Raitt most likely takes her cues from the bluesmen she started out with: ready, willing and able to play as long as humanly possible, social security be damned.