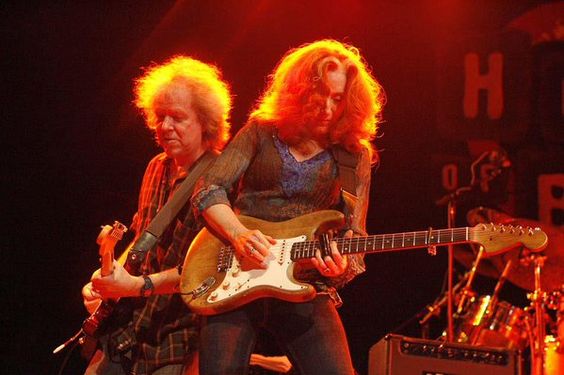 I had the pleasure of seeing Bonnie Raitt perform live at the Ovens Auditorium in Charlotte, NC on March 8th. It was the first time I’ve seen her in person, and to put it succinctly, the experience was first class.

Randall Bramblett, his band and crew pose for photos on the last night of the Southeastern Tour with Bonnie Raitt. What a show! What a tour! Thanks Bonnie from all of us!!! Ovens Auditorium, March 8, 2006 © Rick Booth

Bonnie has a reputation for handing out breaks to many a struggling songwriter. Her latest studio recording Souls Alike is completely composed of the songs written by unknown artists. The second track from the record is titled “God Was In The Water” and was co-written by Randall Bramblett, who happened to be Bonnie’s opening act on this particular night. I must admit I was more attentive than usual for an opening act . Why? Well, because the musician helping musician back story made it compelling, not to mention the fact that Bonnie Raitt has an ear for a good song, as Souls Alike proves beyond any reasonable doubt. The audience was receptive to Bramblett’s music and I overheard “What was that band’s name?” many times after they’d left the stage. A good sign, but a new band name may be appropriate as “Randall Bramblett” doesn’t exactly roll off the tongue

I was lucky enough to have front row seats directly in front of Bonnie. I feel the need to apologize here as I had paper and pen ready to write down each song, so I could report an accurate setlist for you. However, the band completely sucked me in and taking notes was relegated to a stupid idea about 20 seconds into the show. The house lights came down and it was completely dark in the theatre, only the shadows of the band could be seen and when the first notes were played, the lights came up. The audience burst into applause, Bonnie gave a huge and sincere smile and then she broke a string. A guitar tech took the instrument from her, so she began singing without it. It was funny, but she looked naked without a guitar. After a split second that bordered on being an Ashlee Simpson moment, the guitar tech returned with a replacement 6-string and she never missed a step. I’m quite sure that this was not the way she wanted to start the show, but the way the band, the stage hands, and Bonnie handled the inconvenience reminded everyone the $60 they paid was well spent.

The professionalism oozed into every crack and crevice of Ovens Auditorium. Not a surprise for someone who has been in the business as long as Bonnie Raitt has been, not to mention the fact that the woman has nine Grammy awards on a shelf somewhere and was inducted into the Rock and Roll Hall of Fame in 2000. But I wanted to forget all that. I only wanted to see how she could move me now, live in person, standing less than 20 feet away.

Move me she did.

Her band consists of George Marinelli on guitar and backing vocals, James ‘Hutch’ Hutchinson on bass and backing vocals, Jon Cleary on keyboards and vocals and Ricky Fataar on Drums. Not a single mistake was made by these first-class players. This talented crew knew each other intimately. At times it felt awkward to watch, like watching a couple make out in a public place. What the band members were doing with each other was so personal I actually felt like an intruder. It was an incredible experience.

I knew Bonnie was a good guitar player but in reality, I had no clue. She proved to me in no uncertain terms she is a master of her instrument. She is one of the best slide players I’ve witnessed, male or female. But she can do much more than play slide guitar, she can also play wicked rhythm and can fingerpick an acoustic guitar with the best of them. Any guitarist would be impressed with the skills she possesses, but she was never flashy. Her band used their technical skill to hold up what was important in the music as opposed to bringing attention to themselves. In other words, this is a BAND in the purest and most important sense.

Throughout the show, she brought back Randall Bramblett and members of his group to add saxophone, guitar parts, percussion and vocals. There was nary a slice of ego on the stage, which was a breath of fresh air. As goofballs in the audience yelled out requests for some of Bonnie’s biggest hits, my blood boiled. How rude, I thought to myself. This audience intrusion completely broke the connection that was developed. Just when it became overbearing, Bonnie completely defused the situation with kindness. When someone yelled out “Something to Talk About!” she simply smiled and said, “It makes me so happy that you like my songs, I promise we’ll try to get to as many of them as we can.”

If Bonnie Raitt and company are coming within 500 miles of your town, get there at all costs. And in case you were wondering, you’ll hear fan favorites as well as commercial hits. You won’t be dissapointed.