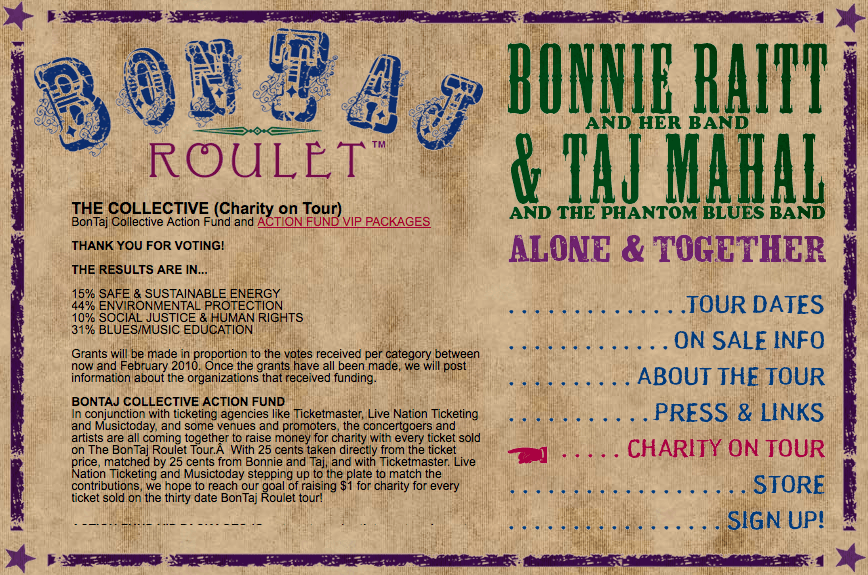 In a tough economy, with music lovers thinking twice before going to see their favorite acts, the 34-date BonTaj Roulet Tour by Bonnie Raitt and Taj Mahal is blazing new green ground in raising money for charities. So far it’s collected over $100,000 for environmental and other causes. It could add that much again before the final show on September 25 at Rancho Mirage, California.

The tour features a unique pairing that cuts across rock and blues barriers…and a whole lot more. With strong reviews and healthy ticket sales on an otherwise rough summer for the music business, the tour is also laying the groundwork for a new mix in the magic art of using commercial concerts to raise funds for green and other causes.

A 25-cent contribution added to the price of each ticket is matched with a 25-cent contribution from the artists. The funds are distributed to causes in proportion to votes tallied through the BonTaj Roulet tour website. Visitors to the website can choose between “safe & sustainable energy,” “environmental protection,” “social justice & human rights” and “blues/music education.” “The funds will be given to nonprofit organizations across the country,” says Kane. “If safe and sustainable energy received 23% of the votes then groups working on safe and sustainable energy will receive 23% of the funds being granted.”

The mix of contributions from promoters/venues and ticketing agencies with matching funds from artists and concertgoers, distributed by popular vote, is a new recipe for concert tour fundraising, says Kane. Many of the dates also feature VIP Charity Action Fund gatherings where donors get special seats and meet with the artists after the show. “Perhaps what makes this unique is the collaborative effort coming from different entities involved in putting on a concert. This way, everyone is contributing to raise funds out of their resources, not just the artist or the fans,”says Kane.

Of the 34 dates on the tour, 31 venues participated in the fundraising effort, she adds, with two choosing to support other causes of their own.

Tour-based fundraising has been a staple of the concert business for decades. Raitt helped organize one of the biggest with Musicians United for Safe Energy (MUSE), which filled Madison Square Garden for five “No Nukes” concerts in 1979. Along with others, she has had a special seating/meet and greet component to her shows for many years. The Guacamole Fund, the facilitator of the VIP Action Fund Charity Packages, has helped stage upwards of a thousand fundraising concerts for green energy organizations over the past 35 years.

Artists such as Dave Mathews are also finding new ways to contribute green to green. As part of a “So Much to Save” Campaign, Mathews is offering a code to download his band’s music in exchange for a variety of actions designed to help save the planet. Mathews is a board member of FarmAid, which has worked for more than a decade to save family farms. His fellow board members include Willie Nelson, John Mellancamp and Neil Young.

Under a gorgeous Indianapolis sky on August 25, Taj opened with a raucous, hard-driving signature R&B set. After a short break, Bonnie delivered virtuoso versions of favorites ranging from “Love Sneakin’ Up on You” to “Angel from Montgomery,” “Thing Called Love” and “I Can’t Make You Love Me.” Taj then joined her for “Satisfied,” “Done Changed My Way of Livin'” and the bawdy “Wah she Go Do” (infamous for the line “a woman must have an outside man”). After the sun set over the city’s White River Park, the two headliners sat back and improvised, front porch style. Raitt said there were “about 40 songs” they could have done. Judging from the enthusiastic response, one got the feeling the crowd would have stayed for all of them.

The Grand Rapids Press called the show there “as close to a perfect ending for a summer concert series as it gets.” As in Indianapolis, the Cape Cod Times reported “standing ovations on nearly every song,” with “a fun mix of genres, incorporating everything from country to reggae, jazz, rock and, of course, the blues.”

The additional news is that those blues for the multitudes meant a stack of green for the greens.

—
Harvey Wasserman was a co-organizer of the MUSE Concerts, and, with Bonnie Raitt, Jackson Browne and Graham Nash, of the nukefree.org website.
Follow Harvey Wasserman on Twitter: www.twitter.com/solartopia