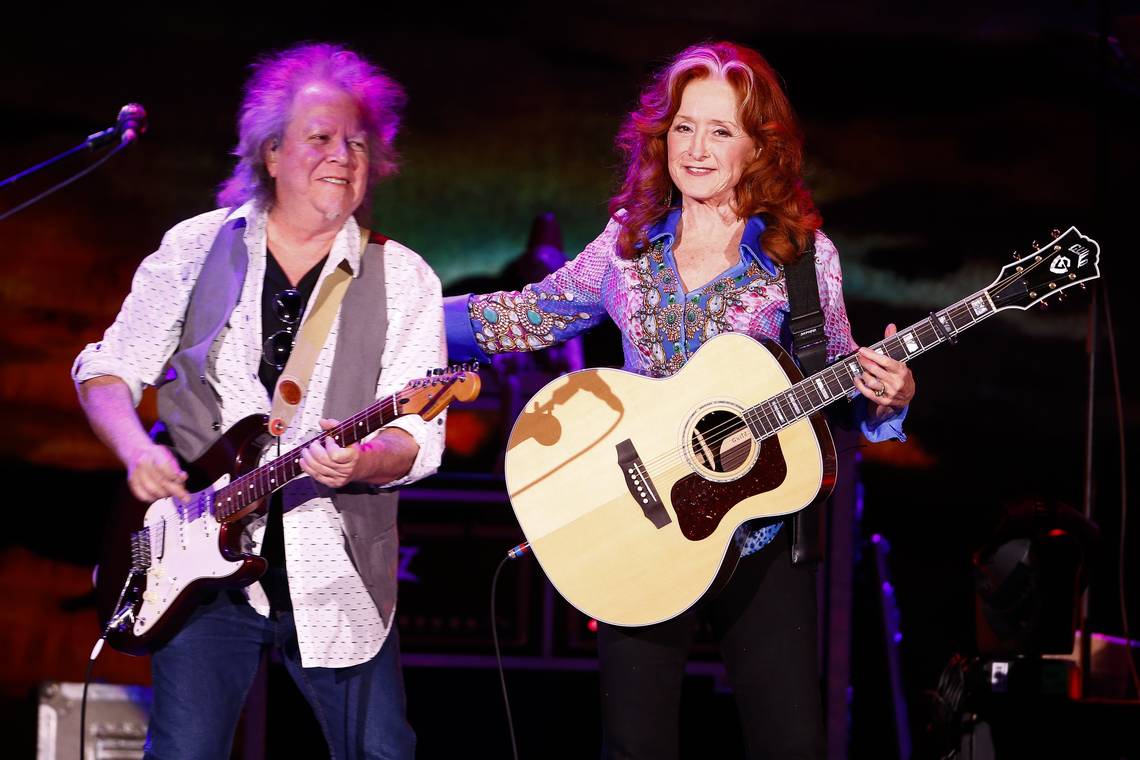 As he got down to business on Wednesday with a near-two hour, hits-laden show full of sublime and unavoidably sentimental tunes spanning over five decades, James Taylor remarked to the audience of 7,200 that one of the greatest pleasures of his nearly concluded tour was watching his co-billed pal Bonnie Raitt “steal the show every night.”

Count Rupp as one of those nights. Oh, nothing against Sweet Baby James. At age 70, he still exuded a good-natured folk-pop exuberance that serviced tunes as varied as the show opening reverie “Carolina in My Mind” and the tropically jovial “Mexico.”

His vocal work – with a few rare, reedy exceptions – has aged remarkably well, too, as did his way with an orchestrally inclined 11-member band that included, get this, a pair of champion Frank Zappa alums (drummer Chad Wackerman and trumpeter Walt Fowler.)

But the divine Ms. Raitt – who, amazingly, was making her Rupp debut –took this night home in her hip pocket.

At 69, her vocals revealed a regal glow, assimilating, as they have throughout her career, a balance of blues, soul and rock ‘n’ smarts. Similarly, her guitar work – a gorgeous, slide-savvy tone that ignited the set-opening “Unintended Consequence of Love” – would serve as rocket fuel throughout the concert.

The sheer scope of what Raitt packed into her hour-long performance was, frankly, astounding. It ran from a slow, swampy revamping of the INXS hit “Need You Tonight” and a solo acoustic blues reading of Skip James’ “Devil Got My Woman” to a cool but decidedly torchy take on her own 1991 hit “I Can’t Make You Love Me.”

But the showstopper was clearly “Angel from Montgomery,” the John Prine classic Raitt is largely responsible for introducing to the world (she recorded it in 1974, three years after Prine, but before many audiences were familiar with the song.) She gave it a solemn but emotive delivery draped with a kind of tasteful world-weariness that yielded a sense of scholarly humanity.

There was also an obvious level of camaraderie between Raitt and Taylor at the show. Taylor began the evening with an extended and heartfelt introduction of Raitt that nicely set the pace for the program’s overall charm that carried over into segments when the two artists sat in on each other’s sets at their conclusions – Taylor during Raitt’s career re-defining take on John Hiatt’s “Thing Called Love” and Raitt as a co-pilot for Taylor’s encore segment that blasted off with a jovial reading of “Johnny B. Goode.”

Again, don’t get the idea that Raitt’s triumph demeaned Taylor’s showing. His set offered a few nice setlist surprises early on – namely, 1970’s “Sunny Skies,” the autumnal title tune to 1974’s overlooked “Walking Man” album and the fatherly snapshot “First of May” (one of the only tunes in the set to venture beyond the ‘70s.)

But it was with two very familiar 1970 works, played back-to-back late in the show, that the emotive extremes of Taylor’s writing came into view.

The first, “Sweet Baby James,” remained a quiet anthem of child-like expression, a cowboy lullaby that unfolded with still-vital innocence. After that came “Fire and Rain,” Taylor’s career-making single – a curiosity, given how the song is a eulogy full of blunt sadness that the singer communicated at Rupp with conversational reserve. In the end, that just made the musical impact all the more devastating.