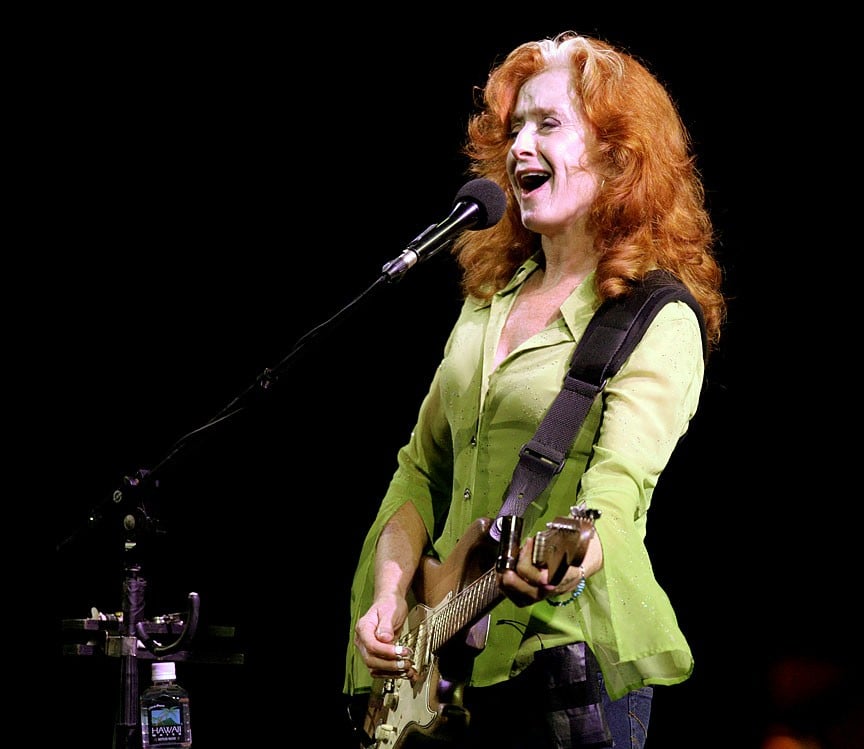 TOO MANY WORDS pop into your head whilst trying to sum up Bonnie Raitt — patronizing but accurate descriptions like “adorable,” “kittenish,” “charmful armful”; overweening banalities like “guitar goddess,” “national treasure,” “talented song stylist”; awestruck platitudinals like “genius,” “artist” or “foxy mama” — but the phrase that keeps up a steady tattoo is “generous.”

Bonnie Raitt is a generous soul, and you sense it simply by the way she interacts with the audience, with the talented musicians in her touring band, with the way she interprets songs. Possibly because Raitt grew up in a musical family of Quakers, and performing was a way of sharing and expressing social conscience, there’s no superstar pomposity when she plays. Raitt plays like she’s giving you a gift from the heart. Generous.

People in the audience would occasionally blurt out, “We love you, Bonnie!” as if the words rode down on a thunderbolt through their subconscious and burst out of their surprised mouths. Raitt would wink and nod. Generous? The folks in the fourth row won their seats by online auction with the money going to charity, and Raitt proudly announced that her tour ran on biodiesel, and she’d remind us, once she had us in her hand, to love the earth and to love each other. Pretty generous, particularly as she often made light of herself.

Although the audience included Scott Ian of Anthrax, Kirk Hammett of Metallica and the Brothers’ Robert Cazimero (Hammett waved the only cigarette lighter visible for a thousand yards), the average Raittophile seemed to be middle-age women and a large proportion of dewy-eyed men.

Raitt’s longtime band — George Marinelli on guitar and mandolin, Hutch Hutchison on bass, Ricky Fataar on drums and the amazing British-born New Orleans soul man Jon Cleary on keyboards and vocals — launched into an R&B rave-up with Junior Walker’s “Roadrunner” to kick things off. Raitt’s strong, smoky voice and astounding slide guitar stirred things up, yet the evening was fairly quiet and reflective.

Raitt has come a long way in three-plus decades and has made a satisfyingly mature transition from a blues-based 4-4 stomper, relying on her guitar to carry the day, to becoming one of our premier song interpreters, someone with unerring and adventurous musical taste and judgment. She’s still one of the most soulful guitarists in America, but frankly, we come to hear her sing, and that many-roads-traveled voice of hers has got grits and steel and heartbreak in it.

“We’ve been vacationing in Maui all week. It’s hard putting these boots back on, I’m telling you!” Raitt laughed. “I’ve never seen my crew in bathing suits before. Which segues nicely into the concept of the passage of time …”

Which means Raitt, after 18 albums and decades on the road, has plenty of songs in her quiver.

Some were new, such as “God Was in the Water,” “Unnecessarily Mercenary” and, dedicated to her friend, political columnist Molly Ivins, “I Will Not Be Broken.” But most were Raitt standards, played with economy and style: “Thing Called Love,” “Nick of Time” — on which Raitt played keyboards, creating a Fleetwood Mac-y rhythm — “Women Be Wise,” “No Gettin’ Over You” — which ended with an anguished howl from Raitt that seemed to surprise even her. “My boyfriend’s flying in tomorrow. I don’t know if that was deprivation or anticipation that made that ending happen!” Also: “Papa Come Quick,” “Angel from Montgomery,” “Love Sneaking Up on You,” “Love Letters” and, of course, “Something to Talk About” and the nearly impossible-to-sing “I Can’t Make You Love Me,” and Raitt broke your heart doing so.

Plus some classics, including Ruth Brown’s torchy “Your Good Thing Is About to Come to an End,” possibly the evening’s high-water mark.

Speaking of water, I don’t know how promoter Tom Moffatt managed it, but it was raining outside the Waikiki Shell grounds but not inside. That was generous, too.