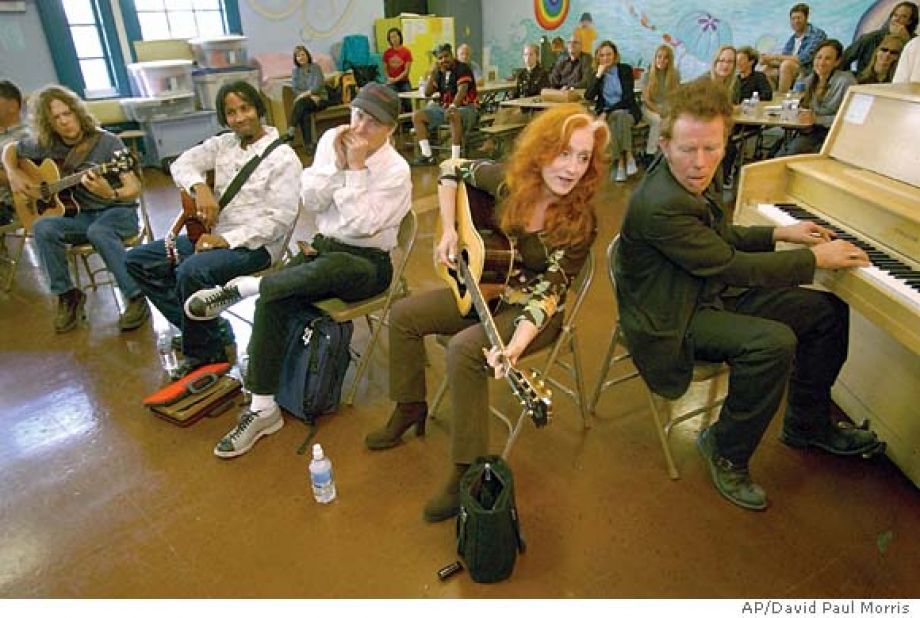 Bonnie Raitt told the kids at Spring Valley Elementary about learning guitar when she was 8 years old. Her hands weren’t large enough to span the fretboard and make an F chord, so she learned to do it with her thumb.

Raitt inveigled her old pal Tom Waits to join her on piano and sing a duet of “Sweet and Shiny Eyes,” a song they knew from touring together a few years back when Jerry Ford was still president. Former Metallica bassist Jason Newsted, currently playing with Ozzy Osbourne, picked up his bass, and Norton Buffalo added a little harmonica.

They were all sitting in a circle in the Russian Hill school cafeteria Tuesday afternoon, swapping songs with the music students, beneficiaries of a program called Little Kids Rock that brings music instruction to elementary schools in four states. While TV news, radio reporters and photographers recorded the session, Little Kids Rock Executive Director David Wish, a former Redwood City second-grade teacher, led the second-, third-, fourth- and fifth- graders in writing a song, while the professional rock musicians backed them up.

With the hit film “School of Rock” giving the idea of grade schoolers playing music a little precious currency, Wish pulled together some of his celebrity supporters to capitalize on his opportunity. Wish, frustrated with the lack of musical education in the school’s official curriculum, started giving free after-school guitar lessons to Redwood City students in 1996, and the Little Kids Rock idea grew from there. For the past two years, he has devoted full time to his burgeoning nonprofit. He puts out a CD every year of songs written and performed by the Little Kids Rock youngsters.

The musicians listened and applauded as the students performed a few songs, the young guitarists strumming strongly, the voices melding in that way only grade school choral groups can. When Raitt and Buffalo started jamming a shuffle, Wish grabbed a guitar and walked around showing the kids what chords to play.

The musicians all talked about how they started playing music and offered the students advice. Buffalo said his father played harmonica and his mother was a singer. Newsted, who got his first guitar for Christmas at age 9, switched to playing bass after he saw Kiss. He also described the kind of heavy metal he plays as “lots of real loud ouch chords.”

Austin Willacy of hip-hop a cappella group the House Jacks encouraged the students to play instruments. “I have learned that if you sing and don’t play in a band, you don’t get heard,” he said.

Tom Waits allowed that trumpet was his first instrument and that playing bugle for the Cub Scouts was his first gig. He also recalled his first piano, a trashed upright that had been left out in the rain and was given to him even though many of the keys no longer worked.

“I was fine with that, though,” he said. “I just played the ones that were working. I used to make up little songs when I was angry or sad. I’m still doing that.”

Waits, who has children of his own, told the kids he didn’t remember how many movies he made. “I write songs for movies, too,” he said. “They’re supposed to make the movies better, but sometimes you just can’t save them.”

Raitt also encouraged the students to take lessons and do the practice. “I’m real glad I took five years of piano lessons,” she said. “Look what happened — I don’t have to work a regular job.”