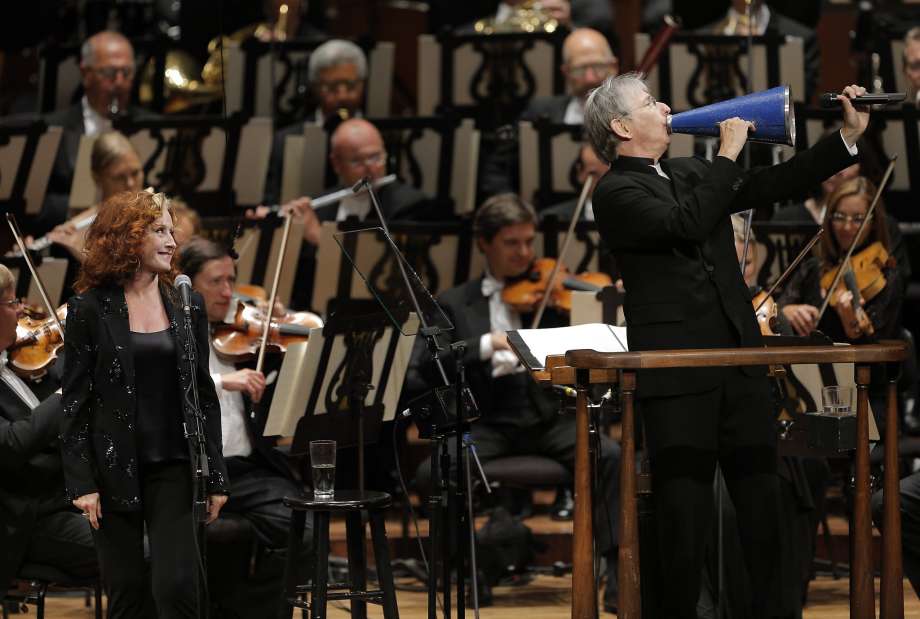 It’s been 20 years, and Michael Tilson Thomas is still coming up with new ways to enliven the old tradition of the San Francisco Symphony Opening Gala. On Wednesday night in Davies Symphony Hall, he did it with a canny mix of guest artists and some familiar repertoire delivered in not-quite-familiar ways.

This was just the kind of event – brash and unpredictable but still marked by deep seriousness – that the orchestra must have hoped to be getting when it brought Thomas in as music director. Whether they could have expected the fizz to last for two decades and counting is another question.

But there it was, still going as strong as the Champagne at the after-party. As the maestro himself exclaimed at the top of the show, “We’re delighted to be working in a field where you don’t get termed out.”

To celebrate the milestone, Thomas invited not only pianist Yuja Wang – without whose multiple appearances no Symphony season is considered complete – but also the great rock and blues singer Bonnie Raitt, a Bay Area denizen who Thomas assured us is a regular concertgoer in Davies.

If it was a pleasant surprise to encounter Raitt in front of a symphony orchestra, it was just as striking to hear her deploying her still-vibrant vocal technique in the service of three classic American theatrical songs. One of them, “Hey There,” was a family heirloom, which her father, Broadway icon John Raitt, had introduced in the original 1954 production of “The Pajama Game.”

“When Michael asked me to do this, I was scared,” Raitt told the crowd. “But it’s good to push your limits at this age, and I wanted to sing with this incredible orchestra.”

The others, though – “That’s My Weakness Now,” a vehicle for ’20s chanteuse Helen Kane, and “Naughty Baby,” the Gershwin brothers’ ode to coy sexual transgression – were further off the trail. Raitt sounded splendid and seemed genuinely moved by the warmth of the audience’s response.

Wang was on hand as soloist for Gershwins’ “Rhapsody in Blue” – but with a twist. Instead of the full orchestral version of the piece that is most commonly encountered, Thomas used the earlier, leaner jazz band scoring (both are the handiwork of Ferde Grofé), which meant that even these well-worn strains came out sounding fresh and unusual.

With most of the musical material entrusted to woodwinds and brass, the “Rhapsody” comes off as a far grittier and more theatrical concoction, and clarinetist Carey Bell – fantastically urgent in the opening wail – and trumpeter Mark Inouye contributed to that aura. And when the lyrical final melody (which many of us, to our unspeakable sorrow, have come to think of as the United Airlines theme) arrived, the sudden focus on the strings made it sound unusually lush.

Thomas contributed even further to the process by mixing up tempos throughout, giving the piece a breathlessly impetuous rhythmic charge. And Wang’s performance, though perhaps a little too controlled to be idiomatic, burst with her characteristic energy and technical bravado.

The rest of the program was Russian and a little more traditional. Stravinsky’s entertaining “Scherzo À la russe” made a lighthearted opener, and it was followed by two treatments of “Romeo and Juliet” – Tchaikovsky’s great Fantasy Overture, in a vibrantly dark-hued rendition, and excerpts from Prokofiev’s ballet to bring the evening to a close.

There were no encores, but what the hey. An entire season’s worth of music still lies ahead.