On the evening of the summer solstice, the longest day of the year, Bonnie Raitt opened a two-night stand at New York’s Beacon Theatre Tuesday (June 21) with a performance packed with its own superlatives. It was the most funky, fierce, fun and heartfelt show you could ask for — from an artist who has just reached a new pinnacle in her six-decade career, with the April release of her most recent album, Just Like That…. 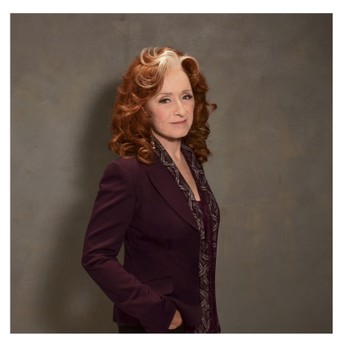 Like the blues artists who became her lifelong inspiration, Raitt offered a set of songs that celebrated love, romantic and sexual; challenged death and the passage of time; and exuded resilience and joy. It is no wonder that she is revered by her fans, emulated by younger artists, like Brandi Carlile, and embraced by veterans, like Mavis Staples, with whom she has shared dates on this tour.

“It’s activists I’m singing for — that’s my job,” Raitt told Billboard during her 2019 tour. Before a single note sounded Tuesday, fans in the theater lobby encountered organizers from the local chapter of the Sierra Club, the environmental organization with its roots in Raitt’s home state of California. They gathered signatures calling for greater action by New York State to fight climate change. Their presence was fitting. Raitt has credited her lifelong environmental activism, in part, to childhood summers she spent at a sleep-away camp in New York’s Adirondack Mountains, during the years when her father, actor John Raitt, was performing on Broadway.

On this tour booked by Raitt’s representatives at the Creative Artists Agency, the opening artists include Staples, Marc Cohn and, for recent dates, Lucinda Williams, who is Raitt’s spiritual sister in the blues. At the Beacon, Williams’ band Buick 6 gave full bore backing to her vocals, which sounded as compelling as ever — despite the stroke Williams suffered in November 2020. The stroke has taken away her ability to play the guitar, for now, she told the crowd. “But that’s going to come back,” she declared, concluding her powerful set to an emotional, extended, standing ovation.

“I love coming back to the Beacon,” declared Raitt, as she took the stage with her five piece band to open with “Made Up Mind,” the lead single from Just Like That…, followed by “Waitin’ For You to Blow,” also from the new album that “we’re all really proud of,” said Raitt.  The 72-year-old singer looked simply magnificent, with her trademark cascade of red hair, fronted by a white forelock, wearing a luminous blue shirt and black jeans. “All of us who are still out on the road… we stopped trashing ourselves in our 30s, just about,” Raitt told Billboard earlier this year when she was named the Icon Award honoree at Billboard’s 2022 Women in Music event.  “You can’t keep up this pace if you don’t do yoga or hike or get some exercise.”

Those who bring the funk

“All right, no more Mrs. Nice Guy,” quipped Raitt as she and the band powered into John Hiatt’s “No Business,” which she recorded on her 1991 album Luck of the Draw. Raitt’s signature sound is a mix of her bluesy vocals, her stinging slide guitar and the deep grooves of her stellar backing band. She took a moment early in the show to introduce her two new recruits —guitarist Duke Levine, who has backed Peter Wolf among many others, and keyboardist Glenn Patscha, whose B3 organ playing highlighted several songs — as well as her longtime colleagues, guitarist George Marinelli and “one of the baddest rhythm sections in the world,” bassist James “Hutch” Hutchinson and drummer Ricky Fataar. In front of Fataar, the drum riser was draped with the blue and gold Ukrainian flag. “That’s to remind us not to forget,” said Raitt.

“Scared to run out of time”

Raitt sat beside Patscha to play the lead electric piano on “Nick of Time,” the title song from her massively successful 1989 breakthrough album, which led her to win three Grammy Awards (including album of the year) in 1990. “It’s hard to believe it’s been 30 years,” said Raitt. With the passage of time and the loss of loved ones, the lyrics she wrote and sang three decades ago were even more poignant: “Life gets mighty precious, when there’s less of it to waste.”

Empathy as deep as the groove

Raitt is not a prolific songwriter, but as evidenced by “Nick of Time,” when she does compose a song, it really counts. She absorbed the songwriting technique of creating, then deeply empathizing with characters in her song from her dear friend, the late John Prine — whose “unimaginable” loss was the greatest heartache of the pandemic for her, she told the crowd. Raitt credited Prine as she took up her acoustic guitar to perform “Just Like That…,” the title song of her album. It is a richly detailed lyric of a heartbroken mother who has lost her son — then meets the man who received the son’s heart in a transplant. “I lay my head upon his chest and I was with my boy again,” she sang. Prine would have been proud.

The emotional toll of the pandemic sounded like a resonating chord through Raitt’s set, but often in counterpoint. Her new song, “Livin’ For the Ones,” co-written with Marinelli, was a rave up, a throw down and a shout out from a survivor:

“Livin’ for the onеs who didn’t make it

Cut down through no fault of their own

Just keep ’em in mind, all the chances denied

If you ever start to bitch and moan.”

“The healing power of music”

Prine’s classic “Angel From Montgomery” was his enduring gift to Raitt, which she has repaid by performing it as she did Tuesday night — with such emotion it was as if she were singing it for the first time. Raitt is a masterful interpreter of others’ compositions, as she proved once more in the closing songs of the show: a sensual drive through “Need You Tonight” from INXS; a fiery rendition of the Talking Heads classic “Burning Down The House” by David Byrne; and then a pair of songs she’d long since made her own — a soft torch-song take on “I Can’t Make You Love Me,” originally co-written by Mike Reid and Allen Shamblin,  and the upbeat show-closing “Not the Only One,” from Irish singer/songwriter Paul Brady.

The common thread throughout Tuesday night was the artistry of this beloved musician who had returned to celebrate life in this moment with her longtime fans and friends.

“The healing power of music is an amazing thing,” said Raitt. “To have that experience with you again means more than I could ever say.”

Bonnie Raitt on Her New Album, Recovery as a Long Game, and a Post-Quarantine Return to Touring — Just in the Nick of Time