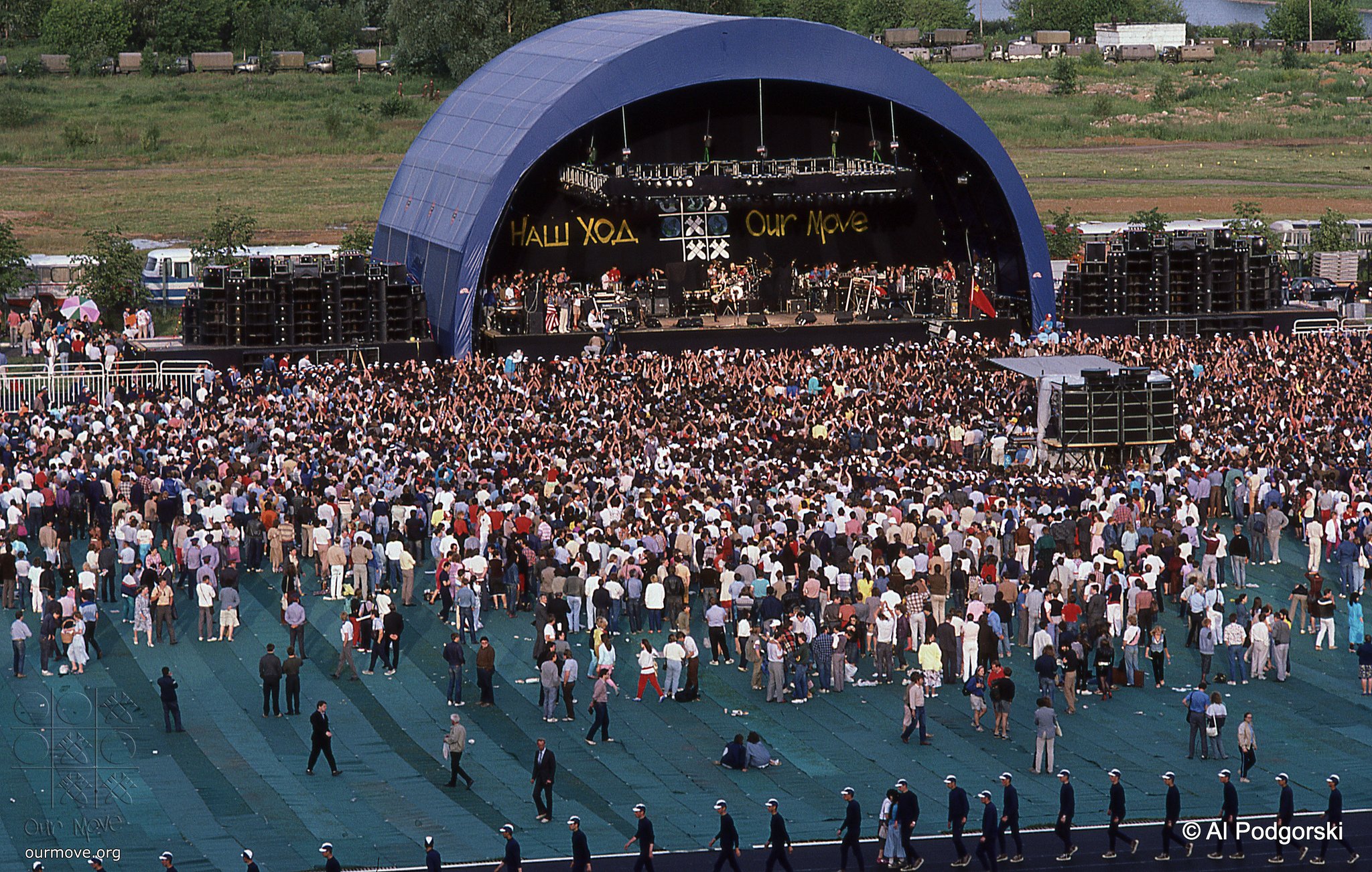 Yet a laid-back attitude prevailed among music lovers, and the concert ended with a rousing performance by Carlos Santana that set the crowd to dancing, with a few fans riding on the shoulders of others in precarious, two-tier maneuvers.

The concert, sponsored jointly by the Soviet Peace Committee and International Peace Walk, an American organization, marked the end of a Soviet-American walk from Leningrad to Moscow by about 400 Soviet and U.S. citizens in support of ending the arms race.

Besides Santana, it featured U.S. performers James Taylor, Bonnie Raitt and the Doobie Brothers, as well as several Soviet performers, including the rock group Autograph.

Concerned, if not fearful, about a large crowd of young people, the Soviet authorities placed several limitations on the event.

At least 150 military transport trucks ringed the stadium. Uniformed militia, soldiers and hundreds of other security personnel attired in matching blue jogging suits and caps were everywhere. The heavy security led to speculation among the Americans that Kremlin leader Michail S. Gorbatsjov would appear. He did not, but he sent greetings, conveyed through Genrikh Borovik, chairman of the Soviet Peace Committee.

The Americans, peace walkers and tourists alike, were taken aback by the security measures as well as by the makeup and relatively small size of the audience. The entire top half of the 30,000-seat stadium was closed. Volunteers had decorated the empty seats with bunches of balloons and streamers spelling out the word peace in English and Russian.

Looking up at the empty space in disbelief, one American tourist, Patricia Nardo of Sherman Oaks said, “Well, I hope the balloons enjoy the concert.”

Moreover, the bulk of 25,000 grandstand tickets distributed were handed out by the Soviet Peace Committee. There was a marked contrast between the fans sitting on the ground in the center field and the largely impassive listeners in the stadium seats, many of whom appeared to be bureaucrats. Halfway through the concert, the available grandstand seats were nearly empty.

“This was not the crowd I expected,” peace walker Carole Shakely of Hermosa Beach said, nodding toward the stadium seats. “Although, I suppose if I were the Soviet government, this is who I’d have given the tickets to also.”

But on the field, throughout the long afternoon and evening, an almost typical Fourth of July mood prevailed. People sat or stretched out on mats; a few dozed, only half-listening to some of the deafening music. Others strolled around the track, bought junk food or played volleyball, basketball and the bean bag game of hacky sack.

The security measures didn’t get in the way of some rock lovers. Sitting with a friend on a green mat on the turf within a few yards of the stage, Michael Schwab, 23, of Munich, said he arranged his vacation to coincide with the arrival of the peace walk. He said he failed, however, to get a ticket that would let him on the field. How did he get there?

“We jumped the fence,” he said. “That’s what everybody does here. That’s how it goes in Russia.”

The crowd seemed to appreciate most of the music, and if the Americans were chilled by the heavy show of security, the Soviet fans were describing the event as “wonderful.”

One Soviet youth who had read about the concert only Saturday morning and paid 10 rubles for a free ticket found himself confined to the grandstand area.

He ran up to some Americans, telling them “It’s wonderful. But I am alone up here. These people don’t like the music.”

The Americans gave him a pass to the field, and he disappeared into the crowd.

By the time Santana came on as the final act, the general mood of the few thousand still there was euphoric. They clapped, sang, stamped, danced and called for more. The entire troupe of performers came on for a finale and ended with a version of John Lennon’s “Give Peace a Chance.”

Afterward, producer Graham, lingering on stage as the stadium emptied, said that he couldn’t feel better and that the concert had exceeded his expectations. He sounded philosophical about the obvious limitations.

“We had to roll with certain realities,” he said, mentioning the Soviets’ uneasiness with a free-form event and a large crowd.

“I think a lot of these people got their pores opened that they needed to have opened.”