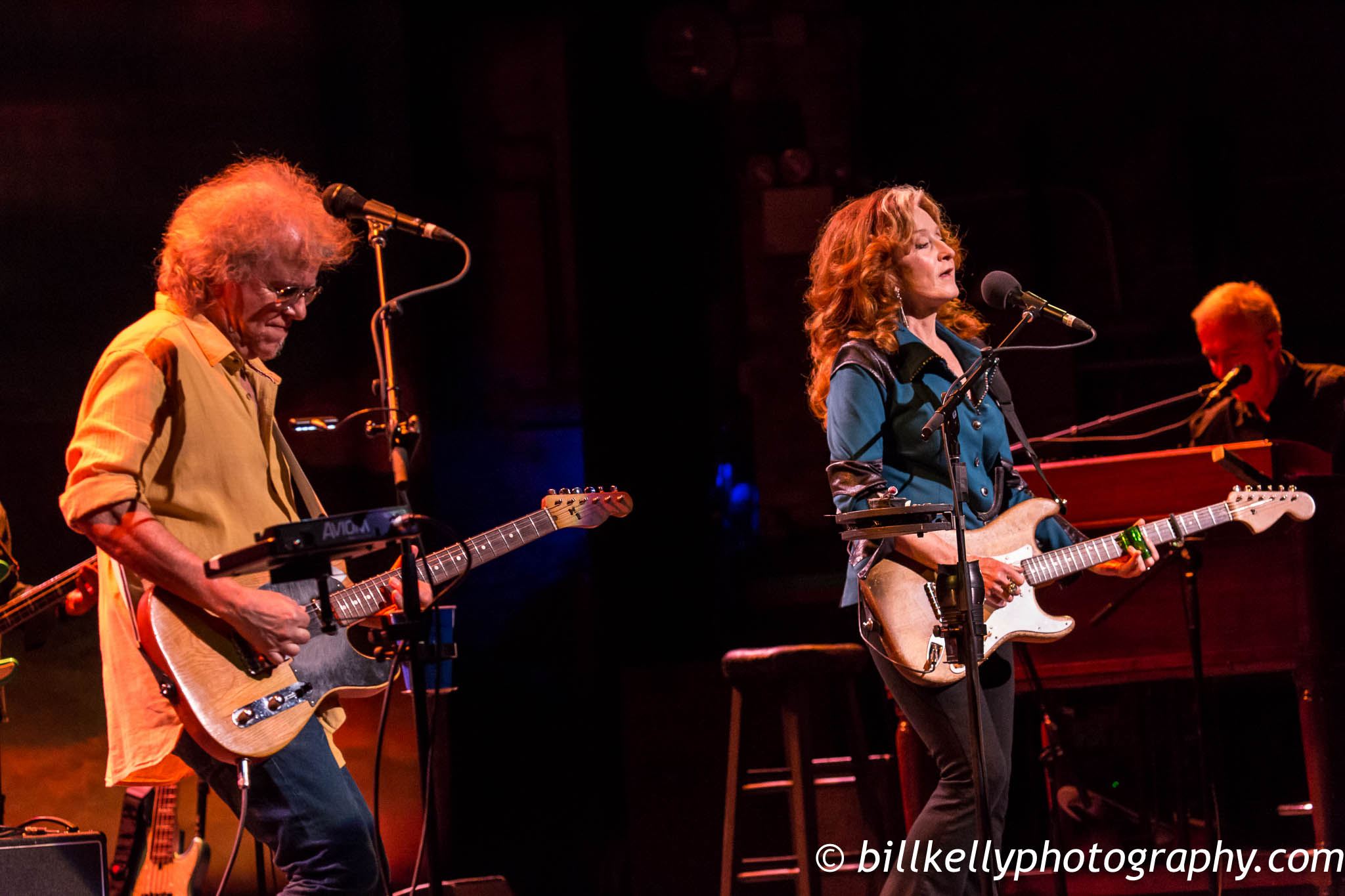 Bonnie Raitt has dodged the crush of fame that did in the Eagles; she has beaten the devils that snared Warren Zevon, found the third act that eluded Linda Ronstadt and Jackson Browne, tended to her vocal cords better than Joni Mitchell, escaped the undertow of the sixties that holds Crosby, Stills & Nash, and kept clear of the Rushmore-y eminence now granted Neil Young. At sixty-six, she’s the real survivor of the California rock scene of the seventies, and to see her perform, as I did, at the Beacon Theatre, the other night, is to see—to strange and powerful effect—an artist from the album-rock era fully intact. But I wasn’t at the Beacon on a nostalgia tour. I was there to hear Raitt play electric slide guitar—to hear her run a narrow glass tube up and down the neck of a Fender Stratocaster tuned to an open chord. If you ask me, Raitt is the greatest living slide player, and I didn’t want to miss a chance to hear a sound that has only a few masters.

She took the stage, and there it was: a blue-glass slide, flashing on the second finger of her left hand. The opening number was one I needed two verses to recognize as “Need You Tonight,” originally by INXS—a song I heard five hundred times in college bars in the eighties and not ten times since. It ought to have been cringe-inducing. But it wasn’t; it was now a Bonnie Raitt song, a sharp woman’s swagger over big guitar chords and a strong kick drum. And then she stepped out and put slide to strings, and the last traces of eighties synthesized glam were banished by the low snake moan of the electric slide guitar.

For Raitt, slide is a second voice, much like her first: tough, physical, subtle, and frankly emotional. It’s a voice cultivated somewhere off to the side of the place where male and female, solo and accompaniment, roots music and new sounds, are distinguished from each other. Raitt’s main guitar, a Stratocaster from the sixties, stripped of its factory finish, is now worn to approximately the same color and texture as her hair, and this contributes to the second-voice effect. Her slide solos are clusters of notes pulled out after the second verse, echoing and underscoring her vocals. At the Beacon, she played slide that way on a tremolo-drenched song from her new record; on a cover of “Shakin’ Shakin’ Shakes,” a Los Lobos party song about earthquakes; and on a reggaeish version of Gerry Rafferty’s 1978 radio hit “Right Down the Line.” And then a stool was brought out and she swapped the Stratocaster for a six-string acoustic guitar.

The fact that B. B. King once called Raitt the “best damn slide player working today” isn’t, in itself, reason to think of her as the greatest living slide guitarist. Ry Cooder is more versatile and innovative—the Yo-Yo Ma of slide, a world traveller with a bottleneck. David Lindley (he of the overdriven lap-steel solo on Jackson Browne’s “Running on Empty”) has opened quarries of old-time music and brought new life to the Weissenborn, a hollow-necked six-string acoustic instrument designed for Hawaiian music. Ben Harper has linked the lap steel to heavy rock. Derek Trucks has stirred the ghost of Duane Allman during a thousand shows with the Allman Brothers and his Tedeschi Trucks Band, making the Beacon Theatre a temple of slide.

All those musicians have made their careers through slide. Bonnie Raitt probably would have had a significant career without it. For her, slide is an added dimension, giving her music an expressive depth and daring that it might not have had otherwise.

She grew up in a show-business family: she’s the daughter of the actor John Raitt (who created the role of Sid Sorokin, in “The Pajama Game,” performing it on Broadway and then more than a thousand times in touring productions—“without calling in sick once,” his daughter said, proudly, from the Beacon stage) and Marge Goddard, a singer and pianist. She joined the folk scene in Los Angeles and then (while a student at Radcliffe) in Cambridge, opening for Muddy Waters, John Lee Hooker, and other bluesmen from the rural South. On her first records, she played slide on the acoustic guitar, as did many folk singers at the time. She came to know Lowell George, who, with Cooder, was a guru of slide guitar in the Los Angeles rock scene. Onstage with his band, Little Feat, George—unusually—played slide guitar almost exclusively, working a Stratocaster with a Sears Craftsman 11/16-inch socket worn on his left little finger. In a 1977 backstage video, George, wearing white overalls and holding a lit cigarette in his mouth, shows some German fans the basics of slide guitar: “Two notes: bass note and top note, yah?” he says, playing his signature zoop-up-the neck riff. “Now Ry, now Cooder plays [it this way]. . . .”

George died, of a heroin overdose, in 1979, but his influence lives on in Raitt’s slide work. Like George, Raitt plays a Stratocaster that’s run through a compressor on the way to the amp, an effect that narrows the sound and makes it sustain longer. Like him, she favors an open tuning known as taro-patch tuning, in reference to its Hawaiian origins. (One way to get taro patch is to take a guitar that’s in standard tuning and tune to an A-major chord, so that the A, or the tonic note, is found on the first, third, and fifth strings.) While the blues lurk everywhere in Raitt’s work, she—like George—avoids taking long solos, instead foxing her slide work in and around and behind her vocals.

Forty years on, Raitt’s electric-slide playing carries the weight not only of the long-gone Lowell George but of a whole California slide tradition. Just as Robert Johnson came to epitomize the blues of the Mississippi Delta, and Muddy Waters the electric blues of Chicago, and Eric Clapton the London blues revival that begat the Rolling Stones and the Yardbirds, so Raitt on slide now brings to mind a clutch of great players and classic records: Waddy Wachtel on Warren Zevon’s “Werewolves of London,” Joe Walsh on “Life’s Been Good” and the Eagles’ “Life in the Fast Lane,” Lindley on Jackson Browne’s “That Girl Could Sing,” and Cooder on “Bop till You Drop,” his most straightforward Los Angeles rock record.

I had gone to the Beacon show thinking that Raitt’s lasting appeal to people her age had to do with her singing voice and her frankly adult point of view, not with her slide-guitar work. But, by the end, slide seemed a figure for her longevity. Slide has never been new or trendy: it was already old when it was brought into rock, in the sixties. Its effect never depended on youth, speed, or gear. It depended on the player’s ability to slide from one note to the next in such a way as to suggest fugitive emotions: sadness, yearning, melancholy, exhilaration.

She came out without a guitar to stand at a microphone and sing (as an encore) “I Can’t Make You Love Me,” from 1991, the song she is best known for these days. Arranged for piano, it is a subtle, moving recitation of the grim details of a love that has faded. It’s a rope bridge thrown forward from the singer-songwriters of the seventies to their legatees in our time: Sheryl Crow, Norah Jones, and Adele (who sang it at the Royal Albert Hall, in 2011). “I Can’t Make You Love Me” was presented as the emotional heart of the evening, and I’m sure that, for many people at the Beacon, it was. But, for me, hearing Bonnie Raitt evoke full-on heartbreak without electric slide guitar was like hearing Simon without Garfunkel, or McCartney without Lennon—like hearing one voice present and another through its absence.