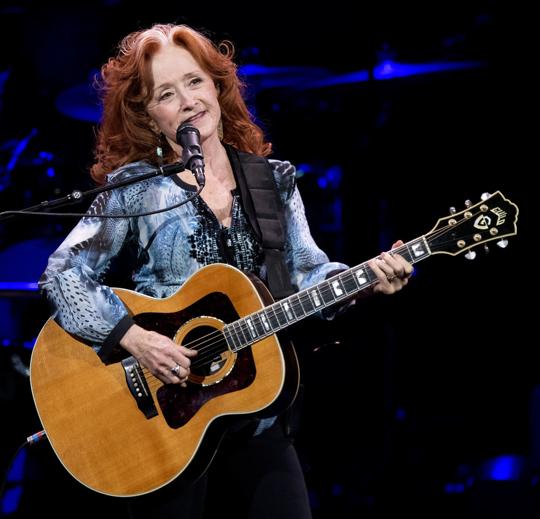 Three hours later, Raitt and Taylor were again onstage together, closing an exquisite concert by the two veterans who are at the peak of their form.

Taylor’s 1-hour, 45-minute show was simply but effectively staged with a screen behind he and band flashing pictures from throughout his career — appropriate, because his set was largely a collection of his best-known songs, delivered by his excellent 11-piece band.

Affable and engaging, Taylor introduced many of the songs with little stories, like that of his nervousness auditioning for Apple Records with “Something in the Way She Moves,” which he began alone on acoustic guitar as he surely played it then.

Then came the “cowboy lullaby” he wrote for his baby nephew — “Sweet Baby James,” which began the string of hits — “Fire and Rain,” an uplifting “Shed a Little Light,” “Your Smiling Face,” “Shower The People.”

All were beautifully sung by Taylor, who is a fine balladeer, inside arrangements for the band that varied in softly beautiful fashion from the familiar recorded versions.

Raitt’s hour-long opening set was fresh — a change-up from her most recent shows that added three notable numbers that showcased what her music is about.

The first of those was an up-tempo blues number on which Raitt traded slide guitar licks with keyboardist Ivan Neville of the Neville Brothers.

Then came “Angel from Montgomery,” her heartbreaking folk-country ballad, and a funky cover of the Talking Heads’ “Burning Down The House.”

Raitt managed to squeeze in most of her best-known songs, including a moving “Nick of Time,” on which she played piano and sang with Arnold McCuller of Taylor’s band.

Taylor returned to the stage to join in on her closer, “Thing Called Love.”

Raitt returned the favor on Taylor’s encore, first with a rocking version of Chuck Berry’s “Johnny B. Goode” and, after a fine “You’ve Got a Friend,” sending a satisfied crowd of 7,000 out into the snow with a hushed, lovely “You Close Your Eyes.”

JONATHAN TURNER jturner@qconline.com MOLINE -- If there are two more beautiful, humble, generous, and enduring souls in the pop music business

By Jimmie Tramel Tulsa World James Taylor has of course seen fire and rain. He saw chill in Tulsa. Fans at BOK Center