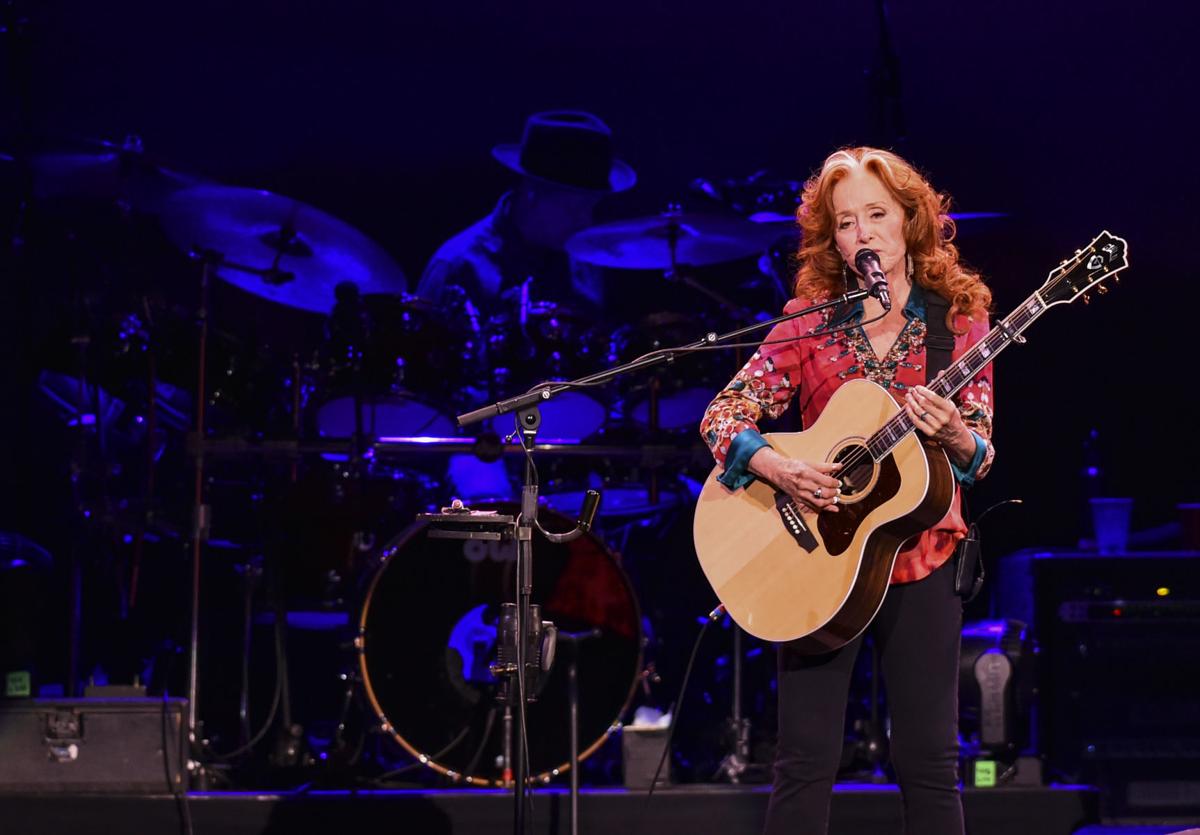 MOLINE — If there are two more beautiful, humble, generous, and enduring souls in the pop music business than James Taylor and Bonnie Raitt, I can’t think of any offhand.

The two staggeringly talented veterans — he’s 70 and she 69 — proved that Saturday night to a packed TaxSlayer Center, in their first joint concert ever in the Quad-Cities.

In these often dark, chaotic, depressing times, it was just so nice to luxuriate in the genuine goodness, comfort and joy of these legendary artists and their amazingly tight, virtuosic bands.

Both Raitt and Taylor, who have been friends and have performed together for years, seemed sincerely touched by the adulation bestowed on them by the Moline crowd. Nearly all available seats Saturday were filled, and it appeared odd that the upper deck’s back center section was curtained off; surely those could have been sold as well.

In her first appearance at the almost 26-year-old arena, Raitt offered an all-too brief set of just over an hour, blending her signature husky, alluring vocals with fine finger-picking on guitar. Her slow, slinky challenge, “Love Me Like a Man,” was followed by the fun, rocking release of “Something to Talk About.”

Like Taylor did later, Raitt gave grateful credit to songwriters of some hits, including the great Bonnie Hayes’ “Love Letter,” and the incomparable ballad “I Can’t Make You Love Me,” co-written by former Bengals football player Mike Reid (talk about a gentle giant!). She delivered a soaring, impassioned and sorrowful performance.

Raitt also took advantage of Taylor and a big member of his crew on a couple standouts. Longtime backup vocalist Arnold McCuller joined her on “Nick of Time,” the title track of her 1989 Grammy winner, which he recorded in 2011. Can it be 30 years old already? That song certainly gains significance with the passing of time, and Raitt paid tribute to all the loved ones who have passed on, making it all the more precious.

She did a glorious mashup of Chaka Khan’s “You Got the Love” and her own “Love Sneakin’ Up on You.” James joined Bonnie just before intermission on a jubilant “Thing Called Love.”

While both sets were a nostalgia-drenched trip down memory lane, over a similar five-decade period of time, Taylor’s was even more so, with the help of massive multimedia. He brought a much bigger high-tech video presentation than I’ve ever seen before.

He last performed at the Moline arena in November 2014, and he performed with his son, Ben Taylor, at Davenport’s Adler Theatre in March 2011. He also played at what was then The Mark of the Quad Cities in July 1998.

Saturday’s show began with a mini-bio (like the fans don’t know?), a flurry of old videos and photos, including Taylor’s North Carolina childhood, and excerpts from interviews and songs.

It flowed seamlessly into his live opener, “Carolina in My Mind,” with his gorgeous quartet of backup singers. A feast of perfectly matched photos and video provided fitting backdrop for every song, and each time Taylor introduced a band member, the screen showed a few photos of them as a child or youth.

A lesser-known early song, “Sunny Skies” (from 1970) was accompanied by video of Taylor and his adorable pug dog. “There’s really nothing we won’t stoop to,” he joked afterward, one of many characteristically droll asides. Taylor related an unprintable joke about the first day of May that his Dad used to tell, as prelude to his irresistible samba-themed “First of May,” from one of my favorite albums of his, “Never Die Young” (1988).

This was also among several numbers that featured crack solos and layers from percussion, horns and flute. Some of the night’s best solos were in a favorite Taylor seemed to reluctantly haul out, “Steamroller” – which he noted doesn’t mean anything to him, unlike most of his songs, and that it takes longer to play it than it did to write it. The trumpet, Hammond B3 and electric guitar licks were awesome, and the number had its usual drawn-out, ecstatic finish.

The Carole King-Gerry Goffin hit “Up on the Roof” was delivered before dazzling black-and-white images and video of New York City’s skyline and landmarks.

Like Taylor must have done countless times, he relayed his breakthrough story of how he was discovered by the Beatles in 1968 and was the first artist signed to their Apple label, but he again conveyed it with the wide-eyed wonder and monumental importance it must have had when he lived it at age 20.

That tender ode, “Something in the Way She Moves,” he neglected to point out (as he sometimes does) gave George Harrison the “inspiration” to use that title as the first line for his Beatles hit, “Something.”

Taylor briefly told the story about the 1970 cowboy lullaby “Sweet Baby James,” written for his nephew. The sweet, perfect song remains magical, though the brother he wrote it for is tragically not around to relive it. Alex Taylor died of a heart attack in 1993 at 46.

James offered needed balm for another loss closer in time and place, as he dedicated the tremendously powerful “Shed a Little Light” to the victims of the recent shooting in Aurora, Ill. Inspired by Martin Luther King, Jr., Taylor implores us remember the “ties between us – all men and women living on the Earth. Ties of hope and love, sister and brotherhood. That we are bound together.”

That moving meditation seems all the more relevant and necessary today than it did when he wrote it in 1991. Through his classic, yearning ballads like “Fire and Rain” and “You’ve Got a Friend,” and exuberant party anthems like “Your Smiling Face” and “Mexico,” Taylor knows how to bring us together and unite us for a common, higher purpose.

He’s the ideal cultural ambassador, and over 50 years later, he still knows how to freshly, honestly deliver the goods, and the goodness. That light surely shined bright Saturday.

James Taylor, a master, lets Bonnie Raitt ‘steal the show every night’
Even the headliner at Rupp Arena knew who really ruled the evening.

RELATED
Taylor and Raitt strike a harmonious note in Newark