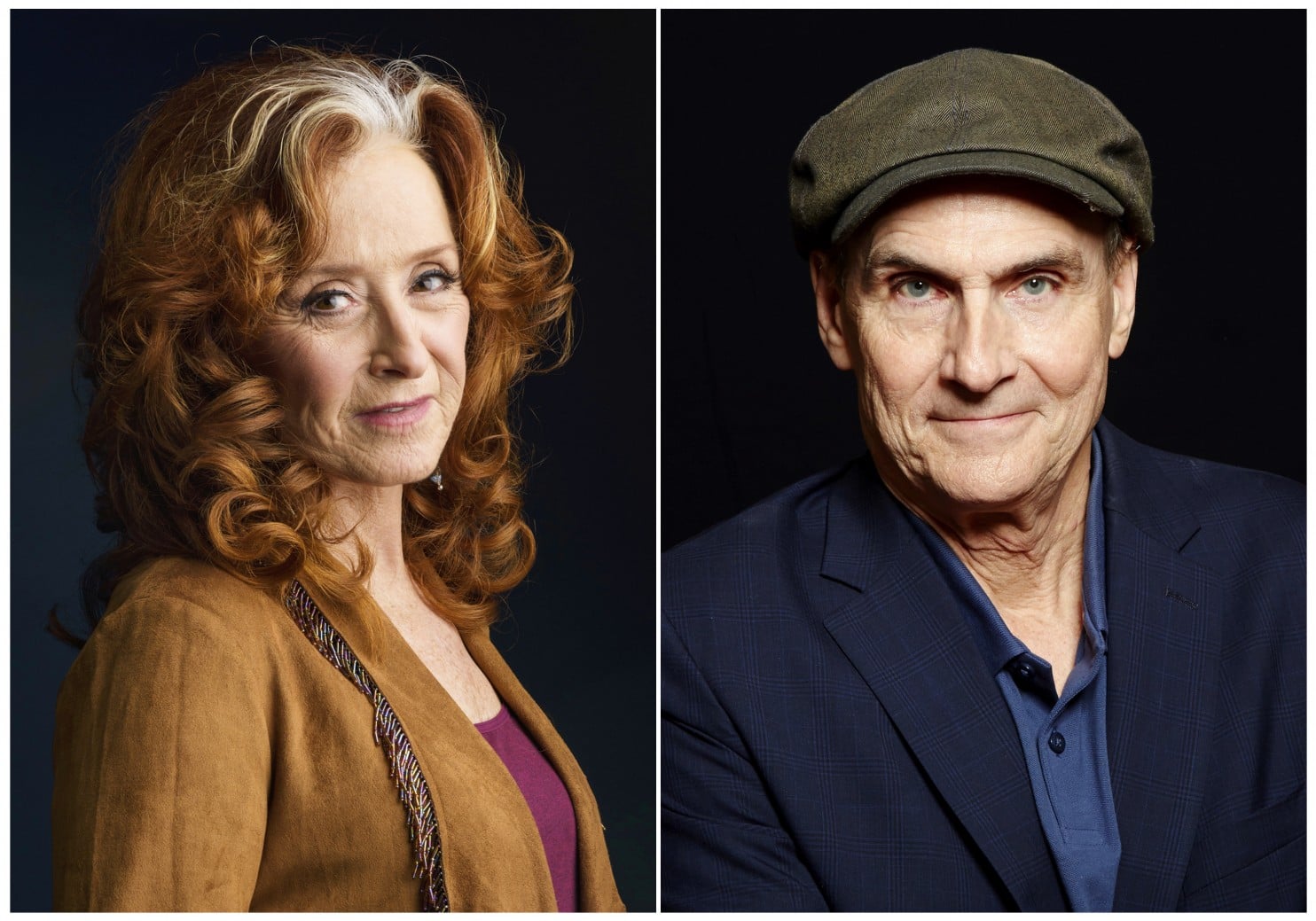 By Leanne Italie, The Associated Press

NEW YORK — James Taylor might just be the happiest road warrior touring today, so what makes him happier?

Bringing on old friend Bonnie Raitt this summer for concerts that include the ultimate in Americana, some of the country’s most storied baseball parks.

“I’ve loved her music and her for a long, long time,” Taylor told The Associated Press in a recent interview. “I’ve interacted with Bonnie, and happily so, at numerous benefits for numerous causes — environmental, social, political causes — over the years. We’re very much in sync in that way. She’s an incredible giver.”

Among their stops will be Boston’s Fenway Park, where Taylor’s home-state team, the Red Sox, live and where Raitt last joined him on the road in 2015. And the first time? Well, that was back in 1970, when he invited the Harvard junior and budding blues singer, guitar player and songwriter onstage for a campus gig at Sanders Theatre after the two met through a mutual friend.

“I was nervous to play because I hadn’t really broken my chops in for concerts that much,” Raitt said by phone from Toronto while on a swing through Canada. “But I was so excited. It was an honor to be both at my school and opening for him. He couldn’t have been warmer and more friendly. It was intimidating to meet one of my heroes but he was just so down to earth.”

Raitt got her first recording contract and dropped out of school around that time. Though she was based on the West Coast and Taylor on the East, the two stayed in touch over the decades.

“The affection between us is so clear and so palpable. Our two bands love each other. James and I are both social activists and we’re really proud that a dollar of every ticket will be donated to various causes,” Raitt said.

The two haven’t worked up their sets yet but Raitt just may include Taylor’s 1968 “Rainy Day Man,” from his debut album and one of her all-time Taylor favorites, written by him and Zach Wiesner. It’s old-school Taylor, desperate and lonely, focused on making a dope connection soon after he tried opiates for the first time in real life, setting him on a 20-year path of addiction.

Raitt covered the song in 1974 on her “Streetlights” album.

“What good is that happy lie
All you wanted from the start was to cry
It looks like another fall
Your good friends they don’t seem to help at all
When you’re feeling kind of cold and small
Just look up your rainy day man.”

“It’s so complex and deep as a point of view, especially for someone as young as James when he wrote it,” Raitt said. “He was so insightful and so deeply in touch with the inner workings and the darker side of the human soul and relationships, and so much of that point of view was so beautifully expressed in his music. That song just speaks to me and always has.”

The summer tour has the two working together for six weeks, kicking off July 6 at Prudential Center in Newark, New Jersey, and winding up at Fenway, Taylor’s third turn there, on Aug. 11. Nationals Park in Washington, D.C., Wrigley Field in Chicago and AT&T Park in San Francisco are among their other ballpark stops.

Taylor, 69, and Raitt, 67, will play hour sets, guesting for each other as well. Come fall, Taylor will come off the road, where he’s averaged about half of each year for the last three years, to begin work on a new studio album, this one a look back at his musical influences.

“I don’t have a release date. We haven’t started recording yet. Past experience has shown me that if you set a deadline you’re just setting yourself up for a fall. I’m not writing these songs. I’m looking at the songs that basically were the source for my musical education. The way I want to record them is just my guitar arrangements,” he said.

His last album of original material was in 2015, “Before This World,” some of which explored his road to recovery. The album didn’t come easy. He left the family, including twin teen boys, to hole up in Newport, Rhode Island, following a 13-year gap for release of new songs.

Raitt put out a studio album last year called “Dig in Deep” and generally works in five-year cycles for recording,

“It’s a lot more fun to be out here on the road playing than it is looking for ideas for a new record,” she said. “Some people enjoy writing and it’s always satisfying, but really the payoff for me is being able to travel around and make people happy every night, including me.”