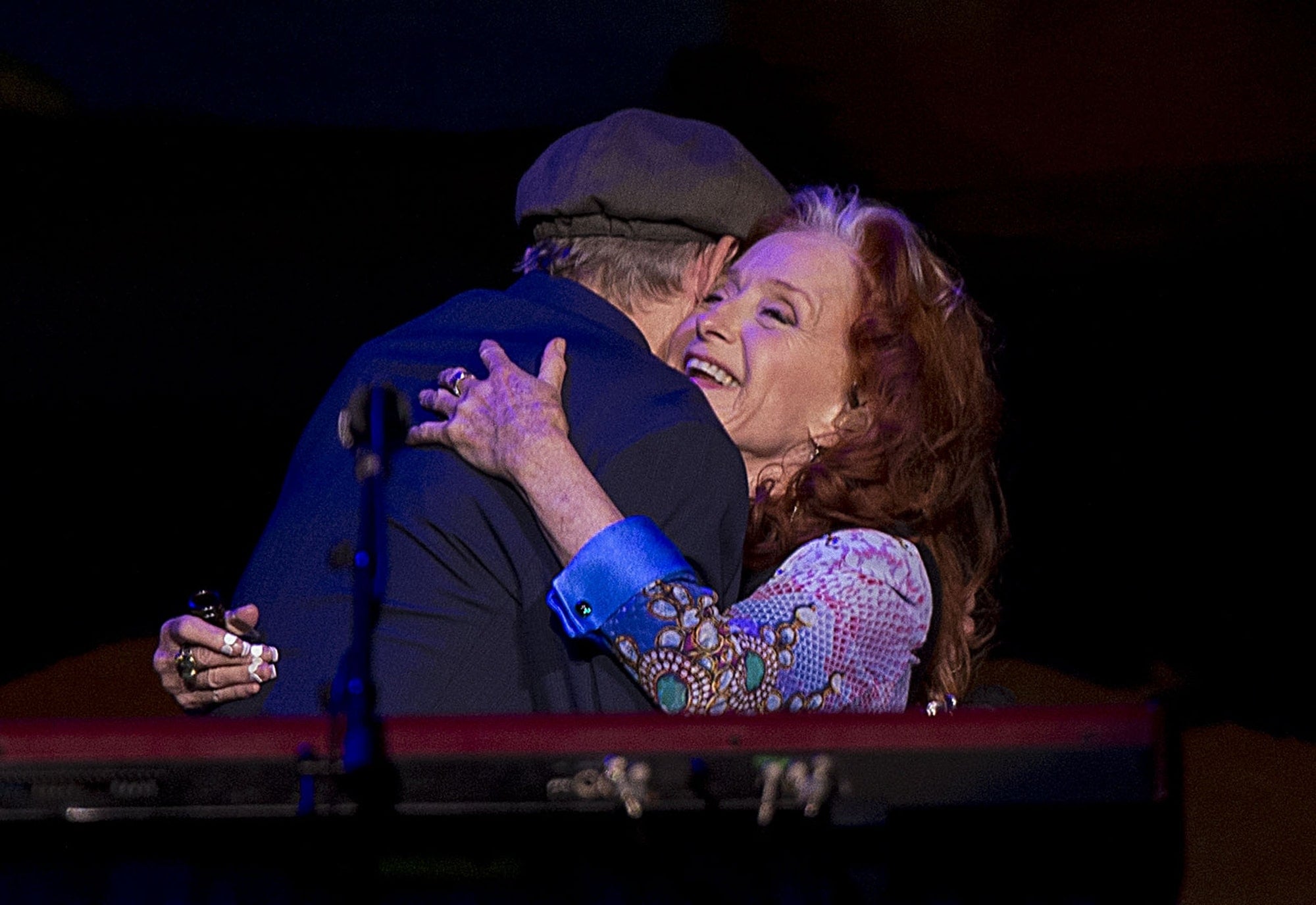 This rarely happens at a big-time arena concert: The headliner comes out at the beginning and introduces the equally famous opening act.

James Taylor made an exception on Friday at Xcel Energy Center, taking the stage to welcome “my dear friend, my idol” Bonnie Raitt, who certainly needs no introduction.

However, Raitt missed the opening leg of her spring/summer tour with Taylor due to emergency surgery. Friday marked her first night on the road.

Raitt, 68, has had major emotional nights onstage in the Twin Cities, where she recorded her 1971 debut album and her brother, sound engineer Steve, lived for more than three decades. There was the night at the Minnesota State Fair a day after Raitt’s pal Stevie Ray Vaughan, the guitar hero, died in a helicopter crash in 1990. There was the night at the fair a few months after Steve Raitt had died of cancer in 2009.

On Friday, Raitt had a different kind of emotion — joy. And gratitude. Both were expressed in conversation and in song. In fact, her too-short hourlong set was quintessential Raitt — acoustic blues, hot slide guitar, funk, R&B, a political piece, pop, rock, ballads and impassioned vocals in all styles. And some preaching politics to the choir of 13,000 fans.

Dedicated to women around the world, the slow and twangy/bluesy “Angel from Montgomery” has never sounded more penetrating. And a solo acoustic version of the Skip James’ blues chestnut “Devil Got My Woman” illustrated that whatever was ailing the Rock Hall of Famer, her voice and guitar skills are as potent as ever.

Raitt was able to cross pollinate with Taylor’s musicians, notably with Arnold McCuller, upping the sexiness of “Nick of Time.” And Taylor himself strapped on an electric guitar for “Thing Called Love,” during which the usually laid-back quintessential 1970s acoustic singer-songwriter suddenly transformed into a shoulder-shaking, knees quaking and head bobbing rock ’n’ roller.

That helped infuse Taylor’s mood for his own 110-minute set. He has never been funnier in concert in the Twin Cities. In fact, who knew he was funny? Playful with a gleam in his eye, he told self-deprecating stories, setting up songs, several of which were complemented with old photos and videos.

For instance, during “Handy Man,” there were videos of him repairing a fence and other workmen falling off ladders and experiencing unintended pratfalls. During “Sunny Skies,” Taylor’s dog pranced across the video screens.

“We’ll stoop to anything,” he proclaimed with a wink in his voice. “Pictures of the dog.”

And the 70-year-old Rock Hall of Famer hammed it up on “Steamroller Blues,” by mock duckwalking, extracting feedback from his amplifier and jumping (not a big one) to end it.

If the humor made this Taylor concert memorable, the music didn’t take a back seat. Backed by his immaculately sounding band, he sang with deep felt conviction, whether it was the folk-rock of “Country Road” or the soul of “How Sweet It Is.”

And, of course, Taylor gave the fans something to talk about by bringing Raitt out for a rip-roaring encore of Chuck Berry’s “Johnny B. Goode” and then a gorgeously tender sit-down duet of Taylor’s “Close Your Eyes,” accompanied only by Taylor’s acoustic guitar.

As he played the outro on his guitar, she put her hand on his knee. He smiled at her as he gracefully plucked away on the final notes. Then he kissed her.