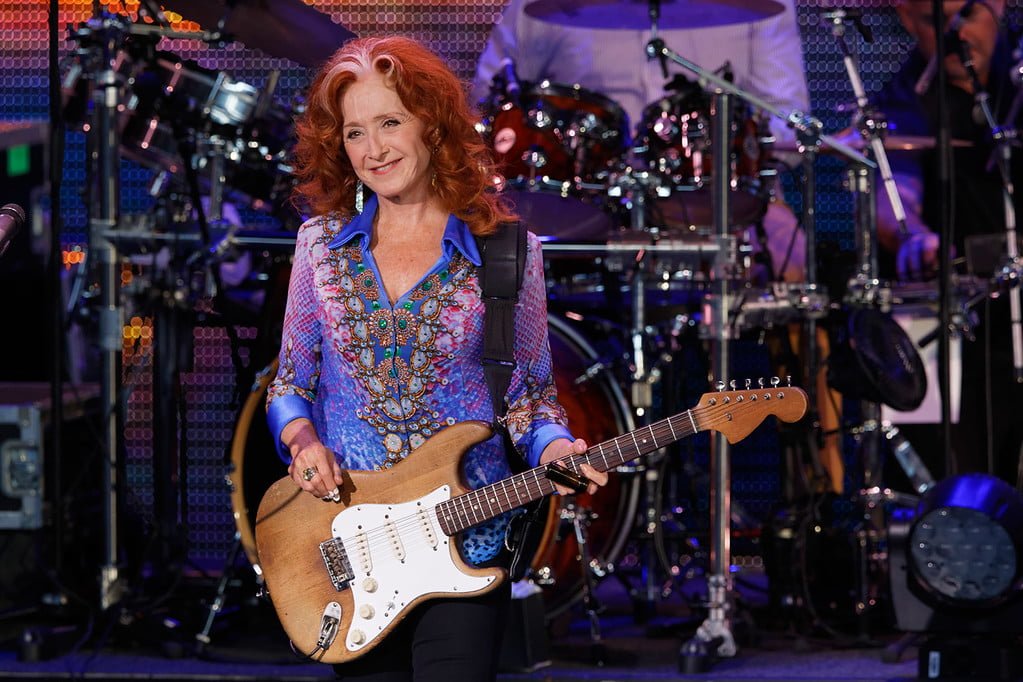 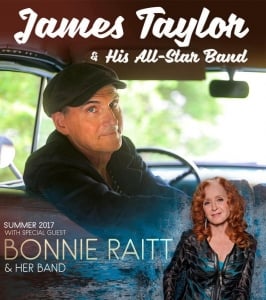 INDEPENDENCE TOWNSHIP — “You got your hands on the right ticket,” James Taylor told the DTE Energy Music Theatre crowd at the start of his concert there with Bonnie Raitt on Tuesday night, Aug. 8.

And it was certainly hard to argue otherwise.

A pair of veteran, Rock and Roll Hall of Fame-inducted performers, each packing a lengthy repertoire of enduring material, is, after all, the perfect formula for a summer amphitheater show. And in the case of Taylor and Raitt you had two artists with histories that gave them more right than most to refer to the place as Pine Knob.

It was indeed a case of one plus one equaling more than two, especially when these two spent time together on stage. Taylor even brought Raitt on at the beginning of the night with a warm and gracious introduction, then joined her for her hit rendition of John Haitt’s “Thing Called Love.” Raitt returned the favor during Taylor’s encores, joining he and his band for a “Johnny B. Goode” tribute to the late Chuck Berry — complete with Berry photos and videos on the rear-stage video screen — and then finishing the night with Taylor on an acoustic duet of his “You Can Close Your Eyes.”

About the only thing the pair didn’t do right was pay some heed to the moment; On the day Glen Campbell died it may have been a stretch to work one of his songs into the performance, but it was unconscionable for neither Taylor nor Raitt to even mention his passing in some form — a genuinely disappointing misstep on an otherwise pleasing evening.

Raitt and her four-piece band, not surprisingly, breathed a little more fire than Taylor and his aptly-billed All-Star Band. Noting the tour’s end this week as “a little bit like the last night of summer camp. We’re getting kind of sad,” Raitt kicked her hour-long set off with sinewy versions of “Unintended Consequence Of Love” and INXS’ “Need You Tonight,” both from her latest album “Dig In Deep” and both leaving plenty of room for her sharply played slide guitar solos. Noting a history with Taylor that stretched back to the late 60s, Raitt paid tribute to her tourmate with a version of his “Rainy Day Man,” and she slide a bit of mentor John Lee Hooker’s “In The Mood” into Chris Smither’s “Love Me Like a man.”

Raitt laid back on favorites such as “Nick Of Time” and “Angel From Montgomery,” which set up a solid closing punch — a fiery rendition of Talking Heads’ “Burning Down The House” and then “Thing Called Love.”

Taylor’s hour-and-50-minutes on stage, in contrast, was an exposition in soft rock, albeit some of the most sophisticated and iconic — “Sweet Baby James,” “Fire And Rain” and “You’ve Got A Friend,” anybody? — of the ilk. Excepting a sound mix that was often too bottomy, with percussionist Luis Conte’s congas far too hot and up-front, the gently paced 20-song set was filled with carefully crafted arrangements that made even less-celebrated fare such as “Sunny Skies” and “First Of May” (introduced with a few comic F-bombs from Taylor) go down easy.

And when Taylor, in his flat cap and sport coat, was rolling out the hits — from the opening couplet of “Carolina On My Mind” and “Country Road” through the likes of “Mexico,” “Up On The Roof,” “Something In The Way She Moves,” “Your Smiling Face” and Marvin Gaye’s “How Sweet It Is (To Be Loved By You)” — it was non-stop singalong city for the boomer-dominated crowd. His own voice may have shown some vestiges of age but still had the familiar mix of Carolina twang and New England nasal, and his three back-up singers (particularly Arnold McCuller on “Shower The People”) kept the harmonies sublime.

Taylor also maintained an air of familial nostalgia throughout, liberally placing home movies and personal photos in the video display — even of his dog during “Sunny Skies,” after which Taylor confessed “there’s nothing we won’t stoop to.” His song introductions were warm and insightful, and with a near-full moon slipping in and out of the clouds, having a ticket for this show definitely seemed like the right thing.

By Jaci Webb   With all her swagger and soul, Bonnie Raitt won over a packed house Wednesday at the Alberta Bair

By Jack Gorman James Taylor, Bonnie Raitt Toyota Center August 1, 2017 Houstonians had other entertainment options other than live music on a Tuesday